What's the right thing to do ? 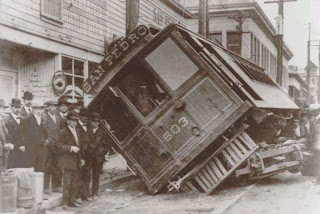 "Suppose you are the driver of a trolley car hurtling down the track at sixty miles an hour. Up ahead you see five workers standing on the track, tools in hand. You try to stop, but you can’t. The brakes don’t work. You feel desperate, because you know that if you crash into these five workers, they will all die. (Let’s assume you know that for sure.)
Suddenly, you notice a side track, off to the right. There is a worker on that track, too, but only one. You realize that you can turn the trolley car onto the side track, killing the one worker, but sparing the five.
What should you do? Most people would say, “Turn! Tragic though it is to kill one innocent person, it’s even worse to kill five.” Sacrificing one life in order to save five does seem the right thing to do.
Now consider another version of the trolley story. This time, you are not the driver but an onlooker, standing on a bridge overlooking the track. (This time, there is no side track.) Down the track comes a trolley, and at the end of the track are five workers. Once again, the brakes don’t work. The trolley is about to crash into the five workers. You feel helpless to avert this disaster—until you notice, standing next to you on the bridge, a very heavy man. You could push him off the bridge, onto the track, into the path of the oncoming trolley. He would die, but the five workers would be saved. (You consider jumping onto the track yourself, but realize you are too small to stop the trolley.)
Would pushing the heavy man onto the track be the right thing to do? Most people would say, “Of course not. It would be terribly wrong to push the man onto the track.”
Pushing someone off a bridge to a certain death does seem an awful thing to do, even if it saves five innocent lives. But this raises a moral puzzle: Why does the principle that seems right in the first case— sacrifice one life to save five—seem wrong in the second?"
Michael Sandel, Justice, what's the right thing to do? p. 21
Publié par marchand